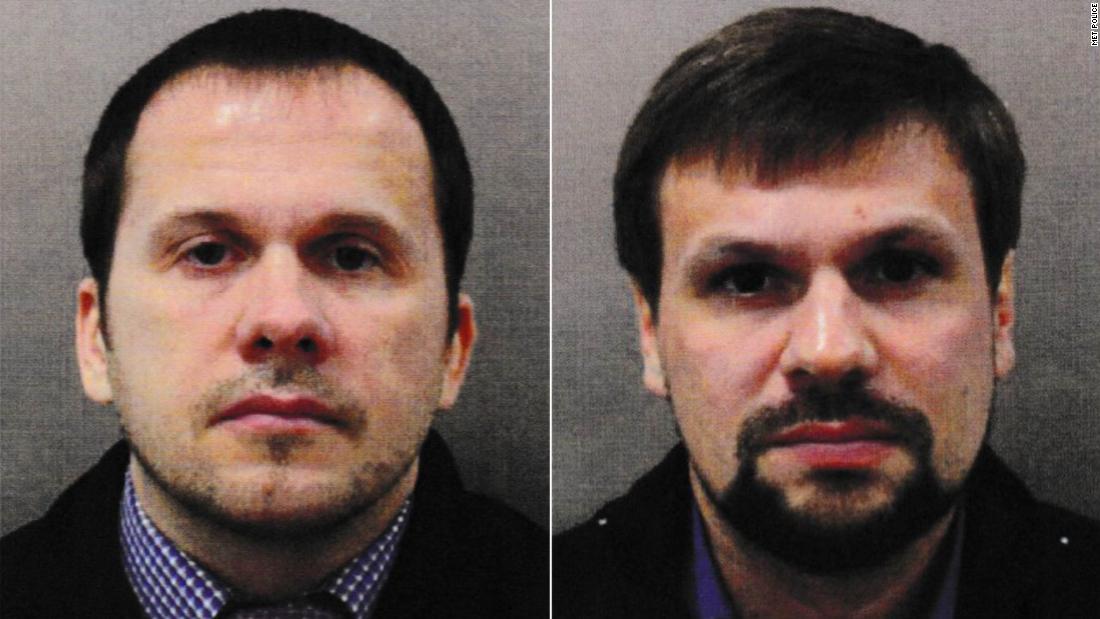 Czech police said Saturday that they were searching for two men “in connection with the investigation” of a 2014 explosion at an ammunition depot in Vrbetice, releasing images of the Salisbury suspects, Alexander Petrov and Ruslan Boshirov.

Police added that the men are known to be carrying various passports, including Russian passports with Petrov and Boshirov’s names.

Moscow has denied any involvement with the Salisbury incident, and the men who identified themselves as Petrov and Boshirov claimed they briefly visited the historic cathedral city as tourists. Putin has said the two men identified as suspects are “not criminals.”

The police say the men were in the Czech Republic between October 11 and October 16 of 2014, and added they also carried passports from Moldova and Tajikistan, under the names of Nicolai Popa and Ruslan Tabarov respectively.

Shortly before the announcement, the Czech Republic said it will expel 18 employees of the Russian Embassy in Prague in connection to the 2014 explosion, which caused huge financial and environmental damage.

“As Foreign Minister I decided to expel all employees of the Russian Embassy who were clearly identified by our security services as officers of Russian Intelligence Services, SVR and GRU,” Acting Foreign Minister Jan Hamacek said at the time.

Prime Minister Andrej Babiš said Saturday “there is well founded suspicion that officers of Russian Intelligence Services GRU, unit 29155 were connected to the explosion of a munition depots in Vrbetice in the year 2014.”

He added that the blast “caused enormous material damage, serious threat and disruption of people’s lives, but especially, it killed two of our citizens, two unexpected and innocent fathers.”

Babiš said he informed the European Council President Charles Michel about the investigation into the explosion. The Czech Republic will discuss the explosion with NATO and European Union allies on Monday, according to a tweet sent early Sunday by Hamacek.

Hamacek was scheduled to travel to Moscow in the coming days to discuss the possibility of the Czech Republic acquiring the Russian Covid-19 vaccine. The trip has been canceled because he would be “needed at the government’s meeting on Monday,” he said.

In a tweet sent Sunday, Deputy Chief of Mission at the US Embassy in Prague Jennifer Bachus said, “The United States stands with its steadfast Ally, the Czech Republic. We appreciate their significant action to impose costs on Russia for its dangerous actions on Czech soil.”

British Foreign Secretary Dominic Raab said the UK “stands in “stands in full support of our Czech allies, who have exposed the lengths that the Russian intelligence services will go to in their attempts to conduct dangerous and malign operations in Europe.”

He added that it showed ” a pattern of behavior by Moscow, following the Novichok attack in Salisbury.”

Relations between London and Moscow deteriorated in 2018 when the UK government pointed the finger of blame at the two Russians it said were the agents of the GRU. The bitter diplomatic fight also saw a wave of tit-for-tat expulsions between Russia and Western nations.
This week the administration of US President Joe Biden targeted Russia with sweeping sanctions and diplomatic expulsions, punishing Moscow for its interference in the 2020 US election, its SolarWinds cyberattack and its ongoing occupation and “severe human rights abuses” in Crimea.