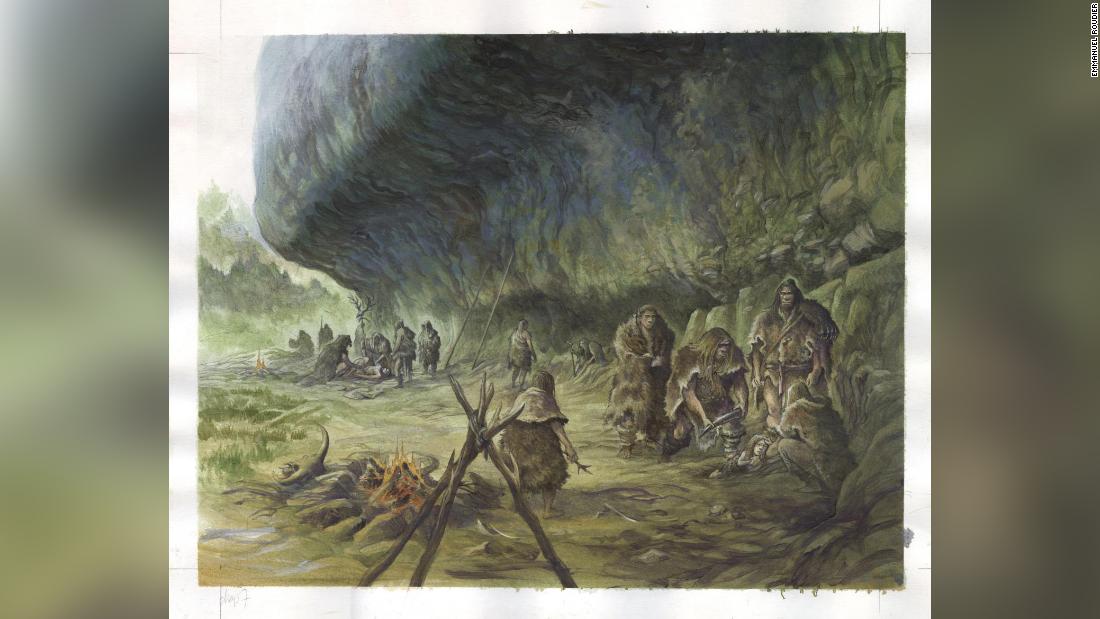 It’s a topic of long-standing debate among archaeologists. Now, evidence of funerary behavior could shed light on the cognitive abilities and social customs of Neanderthals and whether, like modern humans, they were capable of symbolic thought.

Dozens of buried Neanderthal skeletons have been discovered in Europe and parts of Asia over the course of 150 years. The most well-preserved ones, however, were found at the beginning of the 20th century and weren’t excavated using modern methods. This has led to skepticism about whether Neanderthal burial practice was deliberate.

A new analysis of a 41,000 year-old skeleton of a Neanderthal child, found in a French cave in the 1970s, provides fresh evidence that the Stone Age hominins intentionally buried their dead.

French and Spanish researchers re-examined the remains using modern high-tech methods, re-excavated the original archaeological site where the bones were found in La Ferrassie, southwestern France, and reviewed the notebooks and field diaries from the original dig.

Their conclusion? The corpse of a 2-year-old Neanderthal was deliberately laid in a pit dug in the sediment.

The absence of marks from carnivores who may have tried to scavenge an uncovered body and the fact that the bones were relatively unscattered with little weathering suggested that the body was rapidly covered, the researchers said. The remains were also well preserved (better than the bones from animals found in the same layer of earth) despite belonging to a child. Children’s skeletons typically have more delicate bones.

The position of the skeleton also suggested the child had been placed there intentionally. The head, which pointed to the east, was raised higher than the rest of the body even though the land inclined to the west.

“The origin of funerary practices has important implications for the emergence of so-called modern cognitive capacities and behaviour,” the study said. “These new results provide important insights for the discussion about the chronology of the disappearance of the Neanderthals, and the behavioral capacity, including cultural and symbolic expression, of these humans.”

The researchers from the French National Centre for Scientific Research, the Muséum National d’Histoire Naturelle in Paris and the University of the Basque Country in Spain identified 47 bones belonging to the child’s skeleton that hadn’t been previously identified.

One piece of bone was carbon dated and found to be 41,000 years old. Researchers confirmed the bone belonged to a Neanderthal by analyzing the fragment’s mitochondrial DNA.

The child was one of eight sets of skeletal remains found at the site.

Potential evidence of burial has also been found in one of the most famous Neanderthal sites, the Shanidar cave in Kurdistan, located in northern Iraq. This site was home to the remains of 10 Neanderthal men, women and children. They were found with ancient pollen clumps, suggesting that Neanderthals may have included flowers as part of their funeral rites.

More recent excavations of the Shanidar cave have turned up more Neanderthal remains, which early research has suggested were deliberately buried.
Other research has suggested that there was considerable diversity in how European Neanderthals treated their dead kin in the period immediately preceding their disappearance roughly 40,000 years ago — including cannibalism.

The team of researchers said today’s analytical standards should be applied to the other skeletal remains at the La Ferrassie site to assess whether they too were buried.

The research was published in the journal Scientific Reports in December.